This week we review the Altra Vanish Carbon, Altra’s race day shoe for road running, designed to help you run faster! Like all Altra shoes the Vanish Carbon is zero drop. This means that the midsole of the shoe is the same height in the heel as it is in the forefoot. This is to allow you to run with a more natural posture and land on the ground with your feet under your centre of gravity. This promotes a more midfoot landing which loads the foot correctly. This allows the planta fascia on the base of your foot to spread when it touches the floor so that it can absorb the shock and stabilise you. The planta fascia then recoils to spring you into your next stride. To give your foot the space to spread on impact Altra shoes have a more rounded toe box. As the toes aren’t pushed into a point like they are in a lot of shoes the toes have the space to spread. 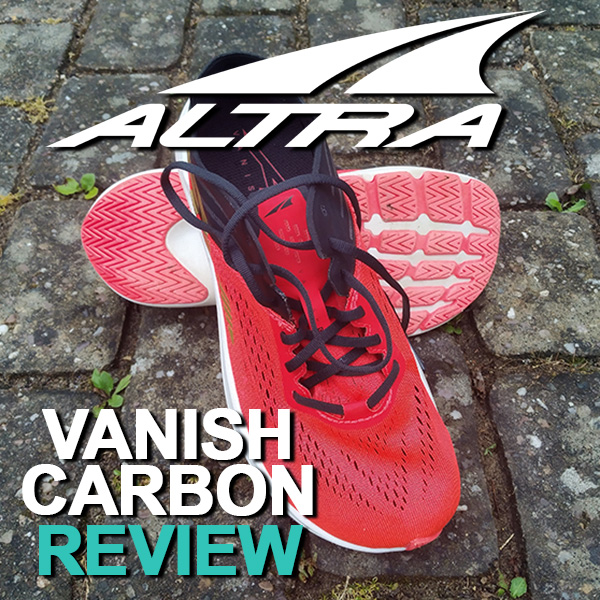 The natural function of your feet spreading, and recoiling makes your feet stronger. The more upright posture that is promoted spreads the forces out so that you don’t over stress any joint. If you have been used to wearing shoes with a higher heel to forefoot, drop and a more pointed toe box then it’s a good idea to gradually increase the time you spend in your Altra shoes. Alternating with your current running shoes. This way your feet will get stronger without getting over loaded.

Although all Altra shoes have a rounded toe box there is now three last shapes. Which gives three different fits. The Original last is the broadest with the most volume in the upper and is used on the Lone Peak and Olympus. The standard last is slightly narrower through the midfoot and has less volume in the upper. This is used on the Torin and Mont Blanc. The Vanish Carbon uses the Slim last. This is narrower than the other lasts providing a snugger more precise fit. This is also used on the Altra Rivera.

The fact that the Altra Vanish Carbon is made on the slim last is likely to be a disappointment to a lot of Altra fans. The brand has been built up on customers wanting a foot shaped shoe with room for the foot to function. The Original last provides this for a lot of runners whose feet spread on impact and therefore have well developed higher volume feet. However, all is not lost. Although Altra has these three lasts’ the fit of any shoe is altered by the materials used for the uppers. The Vanish Carbon is no exception and although it won’t fit those runners who have very broad, high-volume feet it does accommodate broader feet than you would think. Our store manager Craig would wear a wide fit in most brands and had no issues with the Vanish Carbon which he is going to use as his race day shoe in this year’s London Marathon.

Altra make their Women’s shoes on a different last to their Men’s as Women’s feet are shaped differently. Different shoes are still made on different lasts as with the Men’s. Morag who reviews our Women’s Altra shoes prefers the original fit and has a broad foot but, has been able to run in the Vanish Carbon without issue.

As you would expect for a race shoe the Vanish Carbon’s are light. The Men’s weighs 206 grams in a UK 8 and the Women’s 176 grams in a UK 5. The midsole is made from Altra’s Ego Pro midsole which is the same midsole as they use for their trail racing shoe the Mont Blanc. The stack height is 33mm which is high but not as high as a lot of other carbon plated race shoes. Ego Pro has a soft bouncy feel, but the midsole doesn’t feel bottomless. There is still some responsiveness. If a midsole is too soft, then your feet don’t know they have touched the ground. They don’t function inside the shoes. As Altra is focussed on making running shoes that allow your feet to function and therefore help you run with a better posture. The Vanish Carbon has maintained some responsiveness in the midsole.

The upper is very soft and comfortable. The mesh in the forefoot is light and open to make it very breathable. The heel has no heel cup so that it can wrap around your heel shape and give a good fit. The heel cup is made of a PU so that it pulls in around the heel to give a snug fit. There is a little bit of padding at the top of the heel cup to improve the fit. As you would expect from a lightweight race shoe the tongue is very thin to reduce weight, breathability and reduce any water retention in the upper. As mentioned previously the Vanish Carbon is made on Altra’s Slim Fit last but the thin mesh like upper and rounded toe box shape provides a generous fit this is inline with the fit of the Altra Rivera.

Carbon plated shoes are all about increasing the speed you can run. They do this by having a stiff carbon plate running the length of the shoe and having a curved shape to the midsole. This increases your cadence and gives you a noticeable push/spring as you toe off. In effect the shoe is doing the work of your feet, ankles, and lower legs. Altra’s ethos is all about making shoes that allow your feet to function. So, the Altra Vanish Carbon is a bit different.

The Vanish Carbon, like all Altra shoes is zero drop. This allows you to land on your midfoot easily. So, take away the breaking force of landing heel first. This automatically makes the shoes faster than shoes with a high heel to forefoot drop. The carbon plate in the midsole is only in the forefoot of the shoes. In effect it is half a carbon plate. The plate has three prongs which allows your feet to flex the plate and therefore function inside the shoes. The Active Stance rocker or curve starts 65% of the way down the shoes. This gives the shoes are much more natural feel. They are a lot less controlling than other Carbon Plated shoes on the market.

In effect the Vanish Carbon allow your foot to land naturally on your midfoot. As the carbon plate is only in the forefoot it doesn’t over stiffen the shoe. So, it doesn’t pull you down onto the floor. The carbon plate is loaded at the same time as your foot spreads loading the planta fascia. The planta fascia and the carbon plate then recoil. The curve at the front of the shoe and this recoiling gives you that bit extra spring. Which is what helps you go faster than you would in a shoe without these assets.

Morag does most of her running Altra Escalante, Altra Escalante Racer and Topo Magnifly. These are all much firmer and more responsive shoes then the Vanish Carbon. Here cadence is usually over 200. Morag found that in the Vanish Carbon her cadence dropped to 190 but, her stride length increased. So, for the same effort on a flat road she was able to run 20 to 30 seconds a mile quicker. On the uphill and downhill, the soft midsole felt too soft, and she struggled to maintain her pace.

Craig does a lot of his training running to the shop and back. Using Altra Torin 5 which is softer than the Altra Vanish Carbon and the Topo Magnifly which is firmer. He found that the Altra Vanish Carbon felt a lot more comfortable than any other Carbon shoes. A lot more natural and less controlling. As comfortable as an Altra shoe usually is with a bit of a push. He found his speed increased for the same effort by a similar amount to Morag. However, Craig also felt that he was able to get up on his toes on steep hills and run strongly up the hills. Although Craig is used to running in softer shoe than Morag he is not a fan of super soft shoes and struggles in the Hoka Speedgoat preferring the firmer more responsive Hoka Tecton X as mentioned in our Tecton X review northernrunner.com/blog/hoka-one-one-tecton-x-review.

As carbon shoes reduce foot function then it’s not a good idea to run in them too frequently. Once a week for some speedwork and racing is the recipe that works for a lot of runners. For this reason, most brands make a version of their carbon plated shoes without the carbon plate. So, that you can get used to the feel of the foam, the fit of the shoes and the ride that the rocker gives you. Altra is no exception and makes the Altra Vanish. As the name suggests these are the Vanish Caron without the Carbon.

In summary the Altra Vanish Carbon is a race day shoe that allows your feet to function more naturally. The feel is more natural and less controlling than other carbon shoes whole still helping you run faster for the same effort than you would in a shoe without a carbon plate.

Hoka Carbon X 3: These are the classic carbon plated shoe. For more information here is a link to our review:
https://www.northernrunner.com/blog/hoka-one-one-carbon-x-3-review/

New Balance RC Elite V2: These are a 10mm heel to forefoot drop. The Fuelcell midsole is a lot softer than the Ego Pro of the Vanish Carbon.
https://www.northernrunner.com/search/fuelcell-rc-elite

Scott Speed Carbon RC: These are less stiff than the Carbon X with a firmer more responsive feel. Here is a link to our review for more information:
https://www.northernrunner.com/blog/scott-speed-carbon-rc-review-carbon-plate-road-running-shoes/