The Hoka Rocket X is Hoka’s lightest road racing shoe with a carbon plate in the midsole and as such is designed for running at higher speeds. Traditionally, racing shoes have always been firm and responsive in feel so that the power you are putting into the floor can be transferred into forward motion. The cushioning level has also been low to gain maximum foot function. However, in recent times things have changed. Hoka were one of the first brands to introduce a ‘meta rocker’ into their shoes that helps maintain a good up right posture and increases cadence. This helps you, in effect, ‘fall’ forwards. You run with less effort. By adding the meta rocker they were able to make the midsoles softer and more comfortable without making the shoe only suitable for plodding along. As the meta rocker keeps the cadence moving you don’t sink into the cushioning and stay there. The 1mm thin carbon plate in the Hoka Rocket X gives the midsole an added bit of spring and maintains the curve in the shoes. That helps you increase your cadence as you go quicker, resisting the temptation to over-stride. This used your glutes, hamstrings, and calves to move you along. This helps you keep running quickly for longer with less effort. 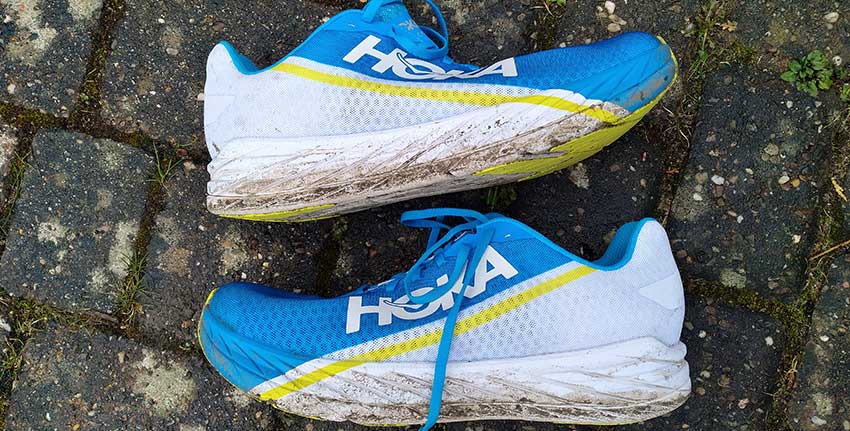 Hoka have made the midsole out of EVA so that it maintains that soft initial feel. The stack height is 30mm in the heel and 25 mm in the forefoot, which is low for Hoka shoes. However, this doesn’t make them feel like they are lacking in cushioning in anyway. The midsole is exposed on the outsole with a thin covering of Armat rubber on the heel and forefoot. The upper is a very thin mesh. The Rocket X is made for race day and speed sessions, so everything has been done to reduce weight (230g for UK9) and help the runner go quickly. So, despite the cushioned feel these aren’t a shoe that will handle lots of training miles. I have done about 150 miles in them now and I can feel that the midsole is a touch softer than when they were new. The Armat rubber is showing some wear at the point where I toe-off, presumably somewhat due to the high amount of training I do on gritty disused railway lines, which are in effect like running on sandpaper! Of course as a shoe designed for road racing or fast sessions and not rough and ready tracks, they shouldn’t be expected to last forever in those conditions.

The fit is like the Hoka One One ‘Carbon X’ and ‘Carbon X 2’ in width and shape. Your foot drops into the midsole to give you a good level of stability. Hoka’s are generally narrow shoes but these aren’t too narrow. In my opinion, they are wider than the Rincon 2 and Torrent but not as wide as a Challenger.

When you pick up the shoe the first thing you notice apart from the lightness is the rigidity. You can’t bend the shoe at all. Yet when I put the shoes on and walked around in them they didn’t feel stiff! The soft feel to the midsole and rocker makes them feel just right. They lack the really pronounced roll that some other Hoka shoes have so you don’t feel like they are trying to make you increase your cadence or go faster. The drawback with other carbon plated shoes that I have run in is that they almost force you into running quicker than you want to. That’s fine if you’re going straight into a tempo run from the door of your home! However, on a tired legs day when you just want to jog a little to get the blood flowing round as you prepare your body for an interval session, you maybe don’t want a shoe that forces your legs round. I found that I was in complete control in the Hoka Rocket X. I could jog or run easy in my warm ups and yet when I wanted to run quickly the shoe would respond. When running quick I felt much more upright and that the shoes gave me extra spring. The harder I pushed off the more I got back from the shoes. This feeling is quite common with firm responsive racing shoes. What is different with the Hoka Rocket X is that they feel so cushioned and comfortable, which is why I have pointed out that they aren’t a shoe to run all your miles in. As you could quite easily do some easy runs in the shoe.

The most notable difference between these and other racing shoes apart from the soft cushioning and the comfort is the perception of effort. I found that when running tempo runs at a set power output on my Stryde foot pod, that it felt markedly easier in the Rocket X than in other racing shoes. I am not sure that over a set of intervals they make me run any quicker, but I think that they make it easier to run at that pace and it feels easier to run at that pace. You can keep it going longer. After tempo runs of an hour I found that the next morning my legs weren’t as stiff as they would be in other shoes. I am not sure if this is because the carbon plate is springing me along or if the soft cushioning is absorbing a bit of shock. It’s probably a combination of the two. The difference is quite noticeable and a real benefit.

It is a good idea to only use carbon plated shoes for the special occasions. Races, tempo runs or interval sessions. This is because the shoe is doing some of the work for you. It’s good to feel what a quick cadence feels like and run tall. However, you want to develop your body so it can do it on its own. That way you are less likely to get injuries caused by your postural muscles getting weak. You will also get much more of a turbo boost from carbon shoes when you wear them in races.

Hoka Rocket X are designed for shorter distance road racing. Hoka’s elite athletes do use them for marathon races. Aliphine Tuliamuk stormed to the Women’s US Olympic Marathon Trails victory in a pair in 2020. However, for most runners they will be a 5km/10km racing shoe.

For longer races the Hoka Carbon X 2 will still remain the best option.