Topo’s latest edition to their trail running range is a highly cushioned grippy shoe. Like all Topo shoes, the Ultraventure is designed to work with your feet rather than prevent the natural movement of the foot. To do this all Topo shoes have a broad, rounded toe box that is more foot shaped than the norm. This shape and space lets your feet expand on impact to absorb shock, stabilise you and then spring you into your next stride. The fit of the heel is snug and the shoes also have a firm fit around the midfoot. This is a bit of a contrast to the other brand that has a foot shaped toe box, Altra. Altra’s generally are a less snug fit at the heel and have more room in the midfoot.

Unlike Altra’s not all of Topo’s range of shoes are Zero Drop. The Ultraventure is 5mm from heel to forefoot which is still low enough for you to run with good posture and encourage a more midfoot strike. If you are used to a high heeled shoe then it would still be advisable to gradually build up the time spent on the shoes, as your feet and lower legs will be more involved in moving you forward. Muscles that were previously used very little will now be working hard. So, you don’t want to over do it when you first run in a low heel to forefoot drop shoe. 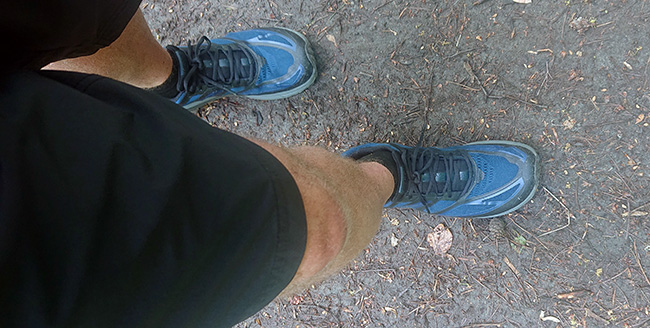 Ideally suited to firmer trails due to the high stack height (30mm heel, 25mm forefoot) the Topo Ultraventure is a very well cushioned shoe. However, unlike other shoes of this type, Topo’s cushion is not soft and soggy. It has a firmer, more stable ride. I have to say that when I first put the Ultraventures on I wasn’t sure we’d get alone, normally wearing a thinner midsole. However, after ten minutes of running in the shoes I had forgotten about the extra stack height and was enjoying the ride! I found the cushioning to be just enough to offer a high degree of protection but there wasn’t so much compression that I lost the feel for the floor or felt like I wasn’t making forward progress.

The upper of the shoe has just enough overlays to make the upper hug the foot but still allows the forefoot to be free. The toe bumper is firm enough and there is drainage holes in the rand to help the water escape should it get into the shoes while stream crossing. The tongue is fully gusseted to stop grit and stones from getting in the shoe. The Ultraventure also has a gaiter attachment for Topo gaiters should you need that bit more protection from trail debris getting in or to seal the gap between your running tights and your shoes to stop the cold. FIND THE GAITERS HERE.

The heel of the Ultraventure is very well padded. Once moving in the shoes it moulded to my heel and gave a very comfortable fit.

The midsole of the Topo Ultraventure has three densities of foam. The light blue heel section is a very soft. Designed for good impact protection for those that land on their heels, which even midfoot strikers do when running down steep hills. There is then a denser dark grey piece on the medial side of the shoe. This is designed to stiffen up the shoe in the midfoot. You can’t feel it at all when you are running in the shoes and it doesn’t really offer much pronation support. It just helps guide the foot onto the midfoot which is needed in a shoe with this level of cushioning. The rest of the midsole is a soft EVA to give a good level of cushioning. It’s not too soft and ‘mushy’ but still has a smooth, soft and comfortable ride. The kind of cushioning that makes you feel like you can just keep plodding a long.

The Ultraventure doesn’t have a rockplate. However, the thickness of the midsole does protect you from all but the most prominent of pointy rocks. I think that a rock plate would make the shoe stiffer and take away the smooth ride that this shoe has.

The outsole pattern of the Topo Ultraventure is well designed, with the lugs spread out to avoid mud clogging between them. The lugs themselves are 6mm long, which is long enough to give good grip on muddy trails but doesn’t feel like you are running on jelly when you hit firmer tracks, trails or tarmac. That makes the shoe suitable for use on a variety of terrain. The outsole itself is made from Vibram’s XS Trek outsole, which is a soft compound. This allows the sole to grip well on wet surfaces and mould to the trail. It also doesn’t stiffen up the shoe too much which is particularly key when you have a shoe with a high stack height.

The fit is very comfortable. Despite having lots of space for your toes to spread and function you feel locked into the shoe. So even on rough terrain there is no movement. Like all the Topo shoes I have worn the heel and midfoot fit is snug and then the shoe opens out to give your forefoot more space. This is a contrast to most Altra shoes that have more room in the midfoot and a looser heel fit.

On the road or hard trails the Ultraventure feels just like a well cushioned road shoe (it’s worth mentioning that the soft outsole compound would wear out if you did a lot of tarmac running in these shoes). On the trails the grip and feel is surprising good for such a well cushioned shoe.

In summary the Topo Ultraventure is a shoe designed for long distance trails running. It will work well as a road to trail shoe and is very comfortable for long slow distance work. The high level of cushioning makes them less responsive so they aren’t the best shoes for running quickly in but, this is the same for all shoes with this level of cushioning.

Hoka Challenger ATR 5
A softer ride with less feel for the terrain. The lugs on the outsole as less pronounced so they aren’t as good a grip on wetter terrain.
The Toes box is the classic pointy design. So, there isn’t as much room for your feet to function.
northernrunner.com/search/challenger-atr-5

Altra Timp 1.5
The Timp doesn’t feel as initially bulky. The lugs are less pronounced so it doesn’t grip as well on softer ground.
Here is our Timp 1.5 review:
northernrunner.com/blog/altra-timp-1-5-review-zero-drop-trail-shoes-northern-runner
northernrunner.com/search/timp-1.5
Altra’s foot shaped toe box is very similar to Topo’s. There is perhaps a bit more volume in an Altra toe box than a Topo one.

Altra Olympus 3.0
The Altra Olympus 3 feels a lot more cushioned with a lot more compression in the midsole. The lugging isn’t as deep so the shoes don’t grip as well on soft terrain. They are also a lot less nimble.
northernrunner.com/search/olympus-3
Altra’s foot shaped toe box is very similar to Topo’s. There is perhaps a bit more volume in an Altra toe box than a Topo one.

Inov-8 Terraultra
The Terraultra has a much firmer ride. This makes it feel more responsive but, doesn’t give a smooth cushioned ride like the Topo Ultraventure. The grip of the Terraultra is a bit better. The rubber is more sticky and so grips better on wetter surfaces. The lugging is a bit deeper to bite into soft ground too. The firmer ride and lower stack height makes it a more nimble shoe.
The Terraultra has a similar broad rounded toe box.
northernrunner.com/shoes-c133/trail-running-shoes-c137/inov8-terraultra-g260-unisex-g-series-graphene-wider-toe-box-zero-drop-trail-running-shoes-black-green-p4505

Hoka Mafate Speed
The Mafate Speed 2 and Evo Mafate Speed both have a similar cushioned feel. In that they are very well cushioned but, not soft and soggy. The grip is similar. The main different is the ride. The Topo Ultraventure gives a more natural ride. Where as the Mafate’s both have a rocker which rolles your foot backwards upon impact. This helps maintain cadence and posture.
All Hoka shoes have the classic pointy toe box. So, there isn’t as much room for your toes to spread out and your foot to function.
northernrunner.com/search/mafate