Topo Athletic is a brand designed to let your feet function. All of the shoes have a broad and rounded toe box to give your feet the room to spread on impact. This stabilises you and stretches out the planta fascia, which cushions you and springs you into your next step. In order for you to be able to land midfoot and load the foot correctly, all Topo running shoes have a low heel to forefoot drop ranging from 0mm to 5mm.

The Runventure 3 is a lightweight zero drop trail running shoe. It is not minimal or flimsy, which is often the impression that runners have when they see that a shoe is a low drop and lightweight. The shoes weighs in at 270g for a men’s UK 8 and 190g for a women’s UK 5. The stack height is 20mm and the feel of the cushioning is firmer and responsive. There is a rock plate sandwiched between the outsole and the midsole to prevent thorns or pointy rocks from sticking into the midsole. It also reduces the chance of getting bruised feet on rocky paths. This does stiffen up the midsole a little but still has some flexibility. Coupled with the firm midsole, the Runventure 3 is a very secure and protective feel. 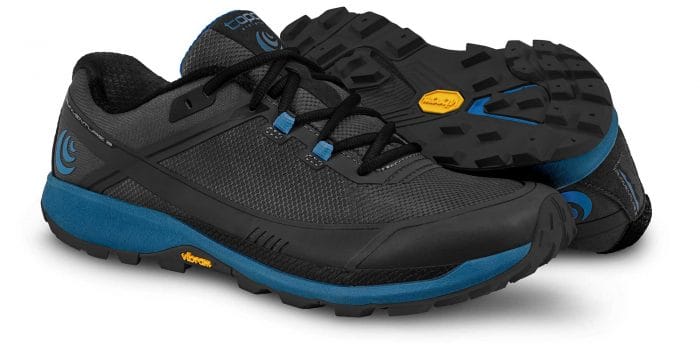 The mesh of the upper is closed and durable. Coupled with the rand that goes all the way around the shoe, this makes the upper durable enough to withstand a lot of trail brambles, grit and general brash. The rand has some drainage holes in it to help get rid of any water that gets in the shoes. These holes aren’t in the mesh that is in the inside of the rand. This will slow drainage a bit, but it means that when you splash through a puddle or run through some long grass, the water doesn’t rush into your shoe. The padding on the tongue is light but ample and as you would expect the tongue is gusseted to stop debris from getting into the shoes.

As you would expect from a Topo Athletic shoe, the fit in the rounded toe box is nice and roomy. The fit around the heel and the midfoot is snug. The tough mesh upper doesn’t hug to the foot as much as it does on some of the Topo road running shoes, which makes you more aware of the space in the toe box. This is more of an observation than a criticism. I like space in the toe box, to expand when I warm up. The upper needs to be a tough mesh otherwise grit wears holes through the upper, usually at the crease points, over time. The fit is certainly secure enough when descending and cornering at speed.

For those who have used Topo Athletic running shoes I would say that the fit reflects the Fli-Lyte 3, although the ride is more solid.
The outsole is the same pattern as other Topo trail shoes (Terraventure , Ultraventure and MTN Racer). The grip is composed of 6mm long lugs that are well spaced out to avoid clogging up with mud. The Vibram rubber used offers a good balance between grip and durability. The problem that trail shoe designers tend to have is that a shoe that works best in the mud is one with really long, well-spaced out studs and is flexible enough to bend to the ground. Whereas a trail shoe that works better on firmer tracks is one that is stiffer with shorter studs, so you have more feel for the ground, more surface area in contact with the rock to give better grip and so you don’t feel like you are running on jelly. That’s what it feels like when you run in long studded shoes on hard tracks.

The outsole of the Runventure 3 is versatile enough to offer good traction in the mud. It’s not a replacement for the longer studded and more flexible shoes and is not a cross country or a fell racing shoe. However, it won’t let you down in all but the deepest mud. The lugs also ride nicely on the firmer trails. I have even used the Runventure 3 on wet tarmac, which is where many trail shoes struggle due to the lower surface area in contact with the road. The Runventure 3 had no problems.

My first run in the Runventure 3 was a muddy, rooty path along a riverbank. The initial feel of the Runventure 3 is comfortable and roomy. I was quite surprised how easy they were to run in over this technical terrain. The route took me back along some smoother gravel trails and the Runventure 3 also rolled well on these. Since then I have used them on much more mixed routes with sections of tarmac that would be a mile or so long. Firstly to see how durable the rubber on the outsole is and secondly to see if after I had been out a while I noticed a difference in the ride of the shoe on these harder surfaces. I found that although the cushioning was firmer, it was ample. This is why at the start of the review I pointed out that these aren’t a flimsy shoe. Even after I had been out a few hours and was plodding back up the hill to my home on the tarmac, I didn’t feel that I had too much feel for the ground. I always felt like the cushioning was enough for me. If you are used to max. cushioning road shoes then these will feel firmer, but for most runners there will be a good level of cushioning. The advantage of a more responsive cushioning feel is that your feet know they have hit the floor, so they function better and as nature intended, spreading on impact. Coupled with the bit of stiffness in the midsole, the firmness also helps you maintain a more upright running posture. Instead of slumping forward as you get tired like many runners do in softer feeling shoes.

The Topo Athletic Runventure 3 is ideal for a runner that wants a lightweight trail shoe that still offers a durable sturdy ride. Not just a short distance fast shoe, but a shoe that is also comfortable and supportive enough to be used for long runs on the trails too.

The zero drop and the broad rounded toe box of the Topo Runventure make it most similar to the Altra King MT and the Altra Superior 4.

Altra King MT 2
These offer a less broad fit compared to the Runventure 3. They are still zero drop with a rounded toe box. The grip is a little better and could be used on the open fells but, they don’t have the sturdy feel and aren’t as versatile so for long mixed trail runs the Runventure 3 in my opinion would fare better.
Here is our review of the King MT 2:
https://www.northernrunner.com/blog/altra-king-mt-2-review/
https://www.northernrunner.com/search/king-mt-2

Altra Superior 4
The Superior is more of a versatile trail shoe than the King MT. It is more flexible than the Runventure and therefore gives a more natural ride. The toe box is similarly roomy. The upper is a lot softer and forms to your feet better but, offer less protection from undergrowth. The Runventure 3’s grip is far superior on wet soft ground:
Here is our Superior 4 review:
https://www.northernrunner.com/blog/altra-superior-4-review-introduction/