The Scott Supertrac RC is set to launch in the UK on the 8th January. We are taking pre-orders here in Mens and Womens and have prepared a review with a test pair for our NorthernRunner.com readers.

“..these are shoes designed for the mud , brash and scree that hammer shoes in the UK.” 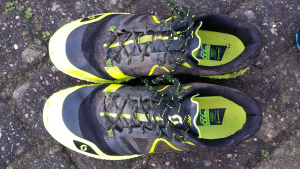 The new Supertrac RC adds to Scott’s existing strong trailing running line up. It’s the lighter weight racing version of the popular Kinabalu Supertrac. If you are looking for other brand comparisons, it will go up against Salomon’s Speedcross, La Sportiva’s Mutant and Inov-8’s X-Claw 275. It is a very grippy trail shoe with effective cushioning. It needs to be responsive enough for short, fast trails or fell races yet protective enough to comfortably get you round a Peris Horseshoe, Wasdale or even something as long and rocky as the Welsh 3,000’s. This is a tough balance to strike, which is why this shoe has been in testing for over a year. British members of Scotts racing team Jo Meek and Andy Symonds have been among the testers. So, these aren’t shoes made for racing in Europe or the States where they seem to stick to hard pack trails–these are shoes designed for the mud , brash and scree that hammer shoes in the UK.

The first thing you notice about the shoe is that there is very little stitching on the upper. It is almost all bonded. This makes the upper lighter and more flexible than stitched uppers. It also means that there are no stitch lines in awkward places that could rub when you have been running a long time and your feet have warmed up and expanded. The other real plus point is that the toe bumper comes a long way back. So, for those customers who push their toes through the top of the uppers of their running shoes, the Scott Supertrac RC is a contender for you. The moulded tongue is also very comfortable.

“..there are no stitch lines in awkward places that could rub…”

Fit wise the Supertrac RC is slightly broader in the midfoot and the toes than the Kinabalu Supertrac. For me this was a more comfortable fit. I felt like my toes could move naturally inside the shoe yet the upper still had hold of my foot so I wasn’t slipping around inside the shoe when contouring.

My first run in the shoes was along the river bank from Shotley Bridge to Allensford. The Supertrac RC felt comfortable from the off and gripped well along the muddy, greasy river bank. My second outing in the shoes was over the moors from Waskerley Head with the first part in the dark on a disused railway line. I could really feel the Scott Eride on this section. All Scott’s running shoes have a curved outsole/midsole, which gently rolls your foot forward after landing. This is designed to keep your cadence quick and maintain good posture. When customers test drive Scott shoes on the corridor at the back of Northern Runner they often say that the Scott shoes feel lighter but they aren’t any lighter than the other brands they are comparing them with. The Eride is what makes them feel lighter. Up until now Scott have used carbon fibre in the midsole of their shoes to maintain this curve. However, in the Supertrac RC this isn’t the case. Scott’s new midsole material holds the curve even after extensive use without a carbon fibre plate. This makes the midsole more flexible which gives you a better feel for the ground.

“When customers test drive Scott shoes on the corridor at the back of Northern Runner they often say that the Scott shoes feel lighter but they aren’t any lighter than the other brands they are comparing them with. The Eride is what makes them feel lighter.”

After the section on the disused railway line I descended down to the river over tussocky grass, on part of the Saltwell Harriers Fell Race route. The shoe becomes more flexible over time (feeling stiff at first) and is now great on this type of terrain. I was very tentative crossing the river as lots of trail shoes that are billed as grippy on wet rock slip on the wet stones in the river. The Supertrac RC didn’t, it gripped perfectly and now I am splashing through the river without hesitation.

“The Supertrac RC didn’t [slip on wet stones], it gripped perfectly and now I am splashing through the river without hesitation.”

The terrain then changes to a big track made up of tennis ball sized stones. Fell shoes often have a thin midsole, which gives you a nice feel for the ground but, on terrain like this you feel every stone. This wasn’t the case with the Supertrac RC. It was very comfortable on this stone-heavy terrain. From here my route went over some thin sheep tracks over the moor, muddy paths and a short section of road. The Supertrac RC coped with all this change in terrain with ease. You often find that heavily studded shoes slide on tarmac and you feel like you are running on stilts. The Supertrac RC’s studs are soft enough to bend and you don’t really feel like you have a studded shoe on at all.

“By the end of my run I was really trying to slip and slide in the shoes but, the grip held..”

My third run in the Supertrac RC was over Roseberry Topping. The steps that have been put in to reduce erosion are very slippy when they are wet. Also parts of Roseberry Topping is quite steep so I could test the grip on steep muddy descents. On the morning I ran here it was very muddy. This was something I thought the Supertrac RC would struggle with. The studs don’t look super long like the Inov-8 Mudclaw (arguably the king of grip in these conditions). I was surprised, the grip was very good. By the end of my run I was really trying to slip and slide in the shoes but, the grip held on all but the steepest and wettest of grassy descents. I think the Mudclaw still keeps it’s mantle for intense, steep mud but the Supertrac RC grips well in these conditions and is far more versatile. On the wet stone steps there was no sliding at all–uphill or downhill.

It’s also worth mentioning that the eride definitely helps you keep good posture ascending or descending. While ascending the curve in the midsole reminds you to keep the cadence high and not fall into the trap of pushing hard and plodding up. While descending the curve reduces the impact by increasing your cadence and keeping you upright. I found these reminders particularly useful as I got tired.

Initially I thought this would be a shoe that I would review and then go back to my usual shoes as I prefer a minimal more flexible shoe. This hasn’t happened and the Scott Supertrac RC has become my go to shoe for my Sunday runs, which is my main off road run of the week. They have now done about 250 miles of varying terrain. The wear is minimal, which is surprising–particularly on the studs. I have long big toes and tend to put a lot of pressure on this area of the outsole. Usually by this point there is significant wear on the studs under the big toe. On some trail/fell shoes that I have the grips have completely gone by this point. The Supertrac RC studs do show some wear but, very little. Usually there is a downside in every shoe but, I haven’t found it yet and am looking forward to wearing the Scott Supertrac RC over variety of off road terrain in 2017.

I sincerely recommend the Scott Supertrac RC if you’re looking for a shoe to give you confidence over a plethera of off-road terrain.