I’d been waiting for the 1st December 2019 since I stood on the steps of the Moot Hall, Keswick after finishing my first winter Bob Graham Round in 2017. Although I enjoyed the adventurous experience of a snowy round and it put a big smile on my face, I believed that with no snow and good fitness Jim Mann’s 18 hour 18 min record was achievable.

Training had gone well since my disappointment in Chamonix; where I had a DNF in the TDS race. After watching the skill with how Ludovic Pommeret used his poles during his march to third place I invested time to really improve my technique with skills training and specific practice. This training was applied well when Rob Brown and myself went on to win the amazing Els 2900 race in Andorra in early October. This was followed by a training block of high volume mountain miles before I began a taper in mid November. This block of training included a few specific training runs where I traversed the first half of the route in tough weather at night, which filled me with confidence. 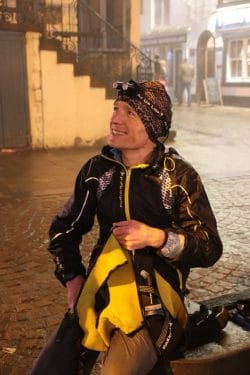 Just over a week out, the weather looked like it could be special. A high pressure would cover the Lake District with cold temperatures, light winds and no precipitation. The big day excitement grew inside me; I confirmed logistics with my pacers and made last minute adjustments to my plan. During many of my training runs I’d either worn a pair of VJ Irock 3’s or VJ Extrm, and had been planning on using these shoes for the round with their aggressive and sticky soles. However with several days of freezing weather forecast the ground was going to be frozen with the risk of icy patches. Having seen a pair of orienteering shoes with the metal ‘dobs’ in the studs at a demo night I thought these would give me security and confidence on the frozen ground. Northern Runner, with their excellent sales service, tracked me down a pair of VJ Integrator 18’s and they arrived just in time on Friday. However I would not recommend wearing new shoes from the box but I knew the risk was worth it.

In the week leading up to the challenge I rested more than normal and by Saturday night I was raring to go. In preparation I had visualised the route over and over in my mind, thought about when and where to eat, memorised the record splits and thought about my purpose which would drive me on during the tough times. Although I had memorised the splits I did not want them to limit me and wanted to take this opportunity to give my very best on the day.

It was a cold night standing at Moot Hall and, although nervous, I was confident the preparation had been done. At 12.05 am I started at a steady clip (with little ‘dobs’ tapping the tarmac) through Keswick accompanied by my Leg 1 pacer Rob Brown. While running up the path leading to Skiddaw I barely noticed the gradient and just knew it was going to be good day. Arriving to the summit of Skiddaw on a cold starry night without a breath of wind was amazing; the air was cold and dry, dropping to minus 7 Celsius, which hit the back of my throat and caused a small tightening of the chest. The back side of Skiddaw was a good test for the new shoes; the grip on the frozen turf and frozen bogs was ideal and a pleasant change from a few weeks ago when I had been wading knee deep in water. The haw frost covering the grass on the climb up Blencathra was dazzling and spectacular, sparkling in the light of the head torch. Rob and I gingerly negotiated the top of Halls fell ridge, which was covered in a dusting of frost, before the terrain becomes easier and we relaxed into the descent. Arriving into Threlkeld in 2 hours 40 mins, I was already 17 mins up on record pace which was far better than expected.

Keen to press on I picked up my Leg 2 pacer Charlie Spronson (Head Guide, Mountain Run) and pushed the effort up Cough Head. Using poles to good effect, I power hiked up the hills and smoothly ran down the descents, making good progress all the way to Helvellyn. During this leg I paid attention to when I was eating and drinking, keeping my body stoked with fuel for the big climbs. The result of this focus was I could stride up Fairfield and Seat Sandal with purpose and enthusiasm. My speed over the leg had left my support scrambling to be in position in time but it was good to see them there ready and waiting. Adam Lloyd captured the moment Charlie and I descended into Dunmail Raise with thousands of stars and a space station.

After the fast start I knew Leg 3 to Wasdale via the Langdales, Bowfell and Scafell Pike would be the decisive leg. I picked up my pacers Jim Scott and Rob Brown (back for a second leg). The first part over the early lower fells was still in the dark and I suffered early morning tiredness with self doubt creeping in on the way to Calf Crag; this soon passed with the first glimmers of light which appeared when approaching Harrison Stickle. The early morning dawn with views over Windermere lifted my spirits and the energy flowed back into my muscles,. The new energy drove me up the climbs to Rosset Pike and Bowfell, and the sunrise heralded a blue sky day with the central fells covered in frost. However the energy which was abundant at Bowfell suddenly drained on Great End, with the jelly legged feeling of a sugar low ‘bonk’ hit hard; I reacted quickly with gels and pizza. The boulders of Ill Crag and Broad Crag were difficult with legs that did not want to coordinate but the legs recovered by the climb to Scafell Pike, the journey was clearly going far better than expected. I descended into Wasdale in 10 hours 10 mins, in good spirits and flying. I had a new goal in my mind, not to limit myself and resolved to aim higher.

With Roger Taylor taking over pacing on Leg 4 duties the fearsome steep slopes of Yewbarrow awaited. The sun beamed down on the south facing slope and I was dripping with sweat as we did what felt like a crawl to the summit. To my surprise the pace was still good and, with Roger keeping my sprits high while I worked the climbs, the tops started to come and go. On the descent off Pillar the sight of Scoffer, my Borrowdale team mate, was enough to give me another boost. The intensity started to pick up and climbing Great Gable I knew it was going to be a very special day. 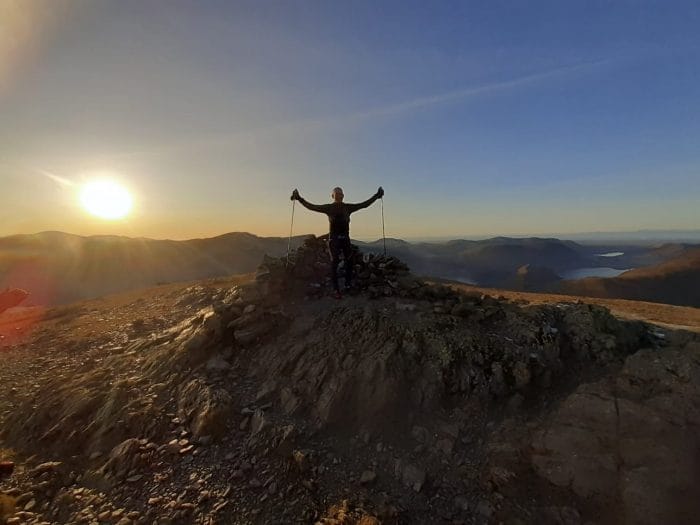 I swept into Honister with my wife Alison and my mum waiting with proud smiles and cheering. I was soon on my way on Leg 5 with the last long climb of Dale Head. With pacers Matt , Adam and Ian taking over support roles and the dream of a sub 16 becoming a possibility, the climb was one of the most enjoyable of the day. I took a moment standing on Robinson with the sun setting, taking in the mighty views to reflect on the accomplishment I had just achieved. Nothing was in my way I accelerated towards Keswick, picking up Harry Ewebank and Rob Brown for the last part of the journey along the road.

It’s amazing what you can find in my legs when a dream is about to be realised. I sprinted up Keswick High Street and bounded up the steps of the Moot Hall. The new Winter Bob Graham Round record was now 15 hours 47 mins, putting me 9th fastest on the clubs all time list.

Petzl Nao head torch, with its powerful reactive lighting, It did a good job lighting my path and last ing the night.

Two thermals and a mid layer covered by a Raidlight MP+ Extreme Waterproof Jacket and two pairs of tights.

Under my waterproof was a super light Raidlight 3L Revolutiv vest. I could then carry and sip water or cola on the move and under the waterproof to stop it freezing overnight.

Around my waist was a trail belt to stuff a couple of Mountain Fuel jellies and store my Leki poles when not required.