The Hoka Speedgoat is well established as one of the most cushioned trail running shoes on the market. Named after Karl ‘Speedgoat’ Meltzer who has won more 100 mile races than anyone else you get the idea of what this shoe is designed for. The rocker that is in all Hoka shoes is positioned to allow the runner to run with a quick cadence and midfoot strike. The cushioning isn’t as soft and pillow like or bottomless like it is in other shoes designed for running Ultra’s in. The Speedgoat is designed to keep you moving quickly. The cushioning is plenty but, it is firm by Hoka’s standards (still quite soft compared to other brands). The effectiveness of the shoes is reinforced by Jim Walmsley’s record in the Western States 100 mile race. The Western States is arguably the 100 mile race to win so for Walmsley to lower the record by 15 minutes or so is pretty staggering. The shoes used for this record was the Hoka Evo Speedgoat. 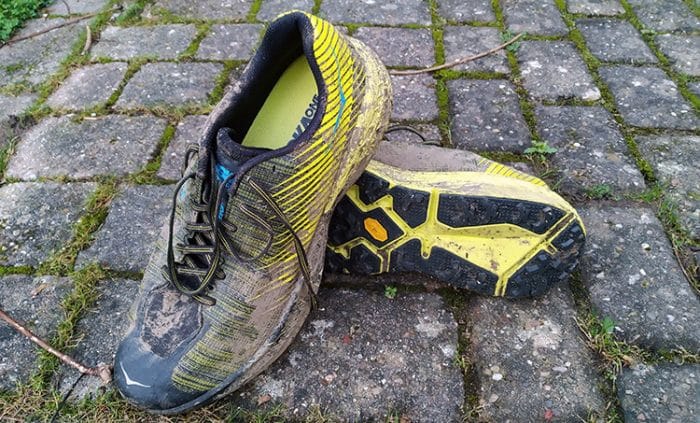 Hoka’s Evo range of shoes have been developed from current models to make them lighter and have a more honed fit. The Speedgoat has a pointy toe box. This is so that when you are descending for long periods your foot doesn’t slip forward. It’s held by the shape of the toe box. Although the Speedgoat 4 has a roomier toe box than previous versions Hoka’s standard width is still quite narrow for a lot of UK feet. This is a particular problem when you have been running for a few hours and your feet have started to expand. There is a wide option in the Speedgoat 4 which has opened this shoe to runners with broad feet and given those who have experienced issues with the regular width, as their feet have expanded. The draw back to going for wide shoes to give yourself more room to expand into is that when running on broken, technical terrain your foot can move around inside the shoe. This is where the Speedgoat Evo comes in. The Upper has a stretchy piece that goes up from the toes to the midfoot. So, when your feet expand the upper stretches. Yet the fit is still snug enough for your foot to not move around inside the shoes even on ruff broken ground.

Trail means different things in different countries and at different times of the year. A lot of American trail running is on dry trails. This isn’t something that we have a lot of in the winter in the UK. Especially currently with all the rain we have been getting. So, I have been able to give the Speedgoat Evo and extreme test.

The first thing that you notice about all Hoka shoes is that they have a high stack height and a broad base. This makes them look bulky and heavy. They are the opposite too this. They are light and don’t feel at all bulky. The midsole is designed to be soft enough to absorb the lumps and bumps of the trail, so you don’t get thrown around by the ground. This is the same concept as Mountain Bike Tyres.

As in all Hoka shoes your foot fits inside the midsole of the shoe. This increases the stability of the shoe and helps the rocker in the shoe work more effectively to increase cadence and help maintain a good running posture.

I was brought up running in Reebok Cross Country Shoes and Walsh Fell Shoes. These are very minimal shoes by today’s standards and are still the type of shoes I feel most at home in. The Speedgoat is the opposite to this in that it has a much broader base. The cushioning is a lot softer and you lose the feel for the ground. In the more minimal shoes you feel nimble and you can skip around the terrain. In the Speedgoat you lose that feeling of nimbleness. This at first felt a little strange. As I couldn’t feel what I was putting my feet on I found that I was being a bit more tentative on rough ground. This wasn’t necessary and I just needed to trust the shoes. You don’t need to know what you are standing on if the midsole just absorbs it.

The next thing that was very different to the shoes I tend to run in was the lack of feel when it came to grip. This again made me a bit nervous. More on icy days when the thickness of the midsole means you don’t really know that you have some grip until your weight is fully on the shoe. In a thinner mid soled shoe you can feel your about to slip and lift your foot up. As with the midsole this was just a matter of trusting the outsole. I found that the lugs gripped well on wet surfaces and even used the Speedgoat Evo’s as my go to shoe for running on icy roads as it stuck better than any of the road shoes I have and had more than enough cushioning (if you do this too often the soft rubber lugs will wear down but, when it’s icy and you have to run then needs must).

The soft cushioning and the way the midsole absorbs the lumps on the terrain makes it easier to run smoothly. I found that I felt less soar after a hard run in the forest in the Speedgoat than I did in more minimal shoes. The grip was surprisingly good on a variety of different surfaces. The studs aren’t narrow and pointy so they don’t bite into the mud as well as a fell or cross country shoe would but, they are grippy enough for you to run on wet muddy terrain. On harder surfaces the studs have enough surface area and are sticky enough in the wet to give good traction.

Where the Speedgoat struggled was on frozen snow where the broader base seems to fall through the snow a bit harder than thinner shoes. The lack of feel made it difficult to lift your feet up quicker to get over the terrain. The same is to true for really deep mud. Especially farmers’ fields where livestock had put deep foot holds into the mud. Normally I would dance over this terrain without a problem but, the lack of feel and the broad base of the shoe made this terrain hard work. It has to be said that both these examples are extreme and only cover short section of my runs most of the time.

The great thing about the Hoka Speedgoat is that you can be struggling up the muddy farmers field one minute. Then hit a firmer track and immediately the rocker helps you get to a quicker cadence and a more upright posture and you feel like you are hovering over the ground. Compared to a more minimal shoe the effort feels less.

Although I do hanker back to more minimal shoes, I have found that I use the Speedgoat more and more. They are ideal for more mixed routes. There is plenty of cushioning for the harder tracks but, the shoe will also cope with wet muddy single track too. The rocker allows you plod along on a softly cushioned shoe without losing good posture.

Despite using them for icy road runs I would recommend them as a road to trail shoe for prolonged periods. The outsole has great grip because the rubber is soft and sticky. If you used them for a lot of runs that where 50% road and 50% trail then the lugs on the outsole would wear down.

In Summary there are few trail shoes that are cushioned enough for the harder trails. Yet grippy enough to cope with the mud of a British Winter (and Summer). In my opinion the Speedgoat is one.

Scott Supertrac 2.0: These have a similar rocker, a slightly better grip in the mud and have more feel. They aren’t as soft and so don’t absorb the lumps and bumps of the trail as much but they are definitely worth considering. Here is our review:
https://www.northernrunner.com/blog/scott-supertrac-2-0-review/

NVii Terra TT: Light , flexible, nimble but, cushioned enough to be used on a variety of terrains. Here is our review:
https://www.northernrunner.com/blog/nvii-terra-tt-review-high-grip-trail-running-shoes/